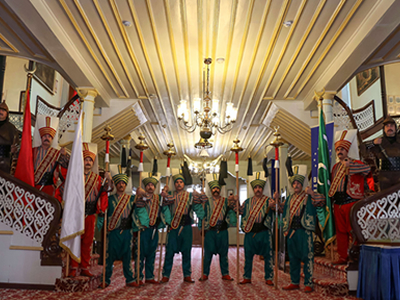 Tug is symbol which means duty and office. The sultan had got seven tug, the grand vizier had got five tug, vizier had got three tug, beylerbeyi had got two tug, mirliva had got one tug.
Tug has got two parts. The first one is with flag and the second one is without flag. The Ottoman's tug is the oldest one which is without flag.
The flag represents the government and has got special colors and shapes. In teh meanwhile it represent freedom, honor and sovereignty of the government, so everyone respects it.
In the middle Asia tug has been used instead of flag.

Army's flag is called “Sancak”. The Sultan of the Seljuk II. Giyaseddin Mesud has sent the fist flag (sancak) to Osmangazi. This flag was yellow. Every military unit had got different flags in Ottoman Empire state. The Sultan and high degreed people had got different shaped flags in different colors. The most important and sacred one was “Sancak-i Serif”. .
The person is called “sancaktar” who carries flag (sancak) . Every sancaktar had got a guard and they were called “flag guard”.

It is the name of guards who are next to banner carrier. There is a guard for banner because of holliness of the banner.

• Bursa Mehterhanesi was founded with the conquest of Bursa in 1326.
• Mehter is the oldest military band in the world.
• Turkey's largest civilian mehter team.